Jack refers to a light and small lifting equipment that uses a rigid lifting piece as a working device to push heavy objects within a small stroke of the top bracket or bottom bracket. Jacks are mainly used in factories, mines, transportation and other departments as vehicle repair and other lifting and supporting work. Its structure is light, firm, flexible and reliable, and can be carried and operated by one person.

Jacks are divided into mechanical jacks and hydraulic jacks, etc., with different principles. In principle, the most basic principle based on hydraulic transmission is Pascal's law, that is to say, the pressure across the liquid is the same. In this way, in a balanced system, the pressure exerted on the smaller piston is smaller, and the pressure exerted on the larger piston is also larger, so that the liquid can be kept still. Therefore, through the transfer of liquid, different pressures on different ends can be obtained, and a transformation can be achieved. The hydraulic jack commonly seen by people uses this principle to achieve force transmission. The screw jack pulls the handle back and forth, pulling the pawl to push the ratchet gap to rotate, and the small bevel gear drives the large bevel gear to rotate the lifting screw, so that the lifting sleeve can be lifted or lowered to achieve the function of lifting pulling force, but not as good as The hydraulic jack is simple. 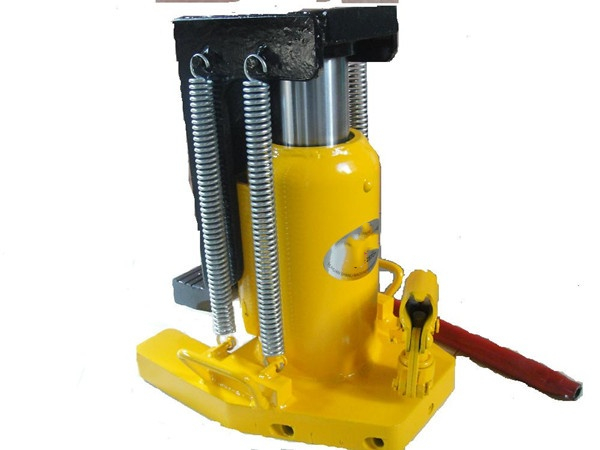 (1) Screw jack. The thread of the screw jack has no self-locking effect and is equipped with a brake. When the brake is released, the heavy object can descend quickly by itself, shortening the return time, but the structure of this jack is more complicated. The screw jack can support heavy objects for a long time, and the maximum lifting capacity has reached 100 t, which is widely used. After the horizontal screw is installed on the lower part, the heavy objects can be moved laterally in a small distance.

(2) Hydraulic jack. It is used as an intermediate medium in the hydraulic transmission system to transfer and convert energy. When used, it also plays the role of lubrication, anti-corrosion, cooling, and flushing of various components in the hydraulic system.

(3) Electric jack. The jack is equipped with a pressure holding device inside to prevent overpressure. If overpressure, the jack will not return to a certain position. The special structure can play a double protective role for the jack. After the subduction device is installed, the lower height can be achieved. The purpose of high travel.